One of the advantages of being in north east Italy is the proximity of neighbouring countries. Austria is one and a half hours away, Croatia only 45 minutes and Slovenia less than ten minutes. The Istrian peninsula in the Adriatic Sea is split between Italy (Trieste), Slovenia (from Koper to Piran) and Croatia, which occupies most of the region.

Istria has had a turbulent history – during the middle ages it was part of the Venetian Republic, but passed to the Austrian Empire in 1797 where it remained for most of the period up to the end of World War I, when it was given to Italy. The Croatian and Slovene populations were then forced into ‘Italianization’ and cultural suppression. However, after World War II the peninsula south of Trieste was included in Yugoslavia and it was the turn of the Italians to be forced out. The breakup of Yugoslavia  saw it split again and the current boundaries were fixed.

The peninsula has a Mediterranean climate and the small towns located along its coast are popular tourist destinations, with many excellent restaurants particularly noted for their fresh fish. Stayed at a delightful hotel in the fishing village of Fazana where it is possible to sit outside restaurants literally a few metres away from the edge of the sea. Fazana was a popular destination for the rich and famous in the second half of the twentieth century. Yugoslavia’s ex-president Tito had a holiday home there and is said to have spent up to six months of the year in the village. A display there shows photographs of other distinguished visitors, including Emperor Franz Joseph I, James Joyce, Thomas Mann, Nehru, Naser, Indira Ghandi, Ho Chi Minh, Henry Kissinger, Queen Elizabeth II, Sophia Loren, Elizabeth Taylor and Richard Burton. 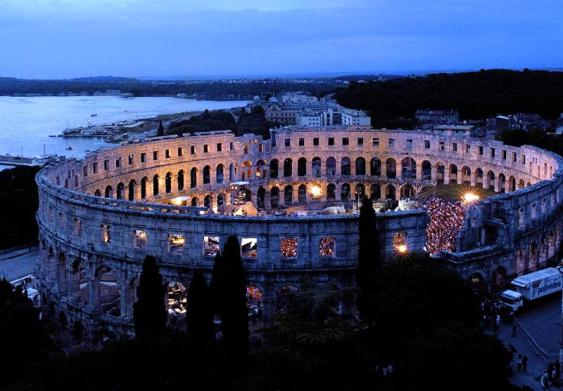